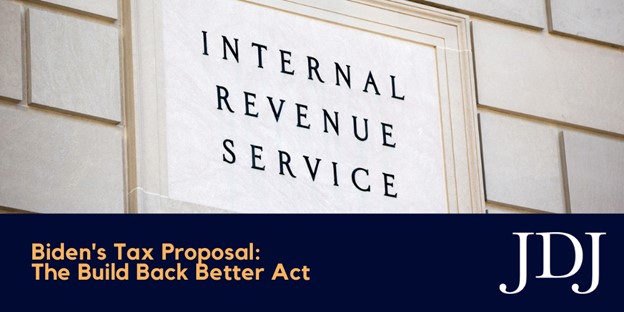 On November 3, the House Rules Committee issued an updated version of its new tax proposal known as the Build Back Better Act.  The Act represents a drastic simplification of the original proposal released by the House Ways and Means Committee on September 13.  The changes are in conjunction with President Biden’s infrastructure package being reduced from $3.5 trillion to $1.75 trillion.

Notably, the Build Back Better Act eliminates many of the proposed changes in the original legislation. The plan no longer includes any of the following:

As a follow-up to our previous series outlining the September 13 proposal, this article focuses on a number of the amended provisions contained in the Build Back Better Act that could affect high-net-worth (HNW) individuals.  The pared-down version has the potential to reduce year-end planning implications significantly; however, this remains a very fluid situation, and the final regulations could still differ from this latest proposal.

The Build Back Better Act maintains many of the new regulations for contributions and distributions regarding “Mega IRAs” (i.e., retirement accounts with a value of $10 million or greater) that were included in the September 13 proposal.  Many of these rules do not take effect until 2029 or later, however, as opposed to the 2022 effective dates in the original proposal.  These provisions are explained in further detail below.

Because individual situations vary in terms of structure and complexity when it comes to tax planning, we recommend that you work with qualified advisors and tax professionals to evaluate and develop an appropriate strategy that fits your needs. Please contact me or a member of your JDJ team for assistance.