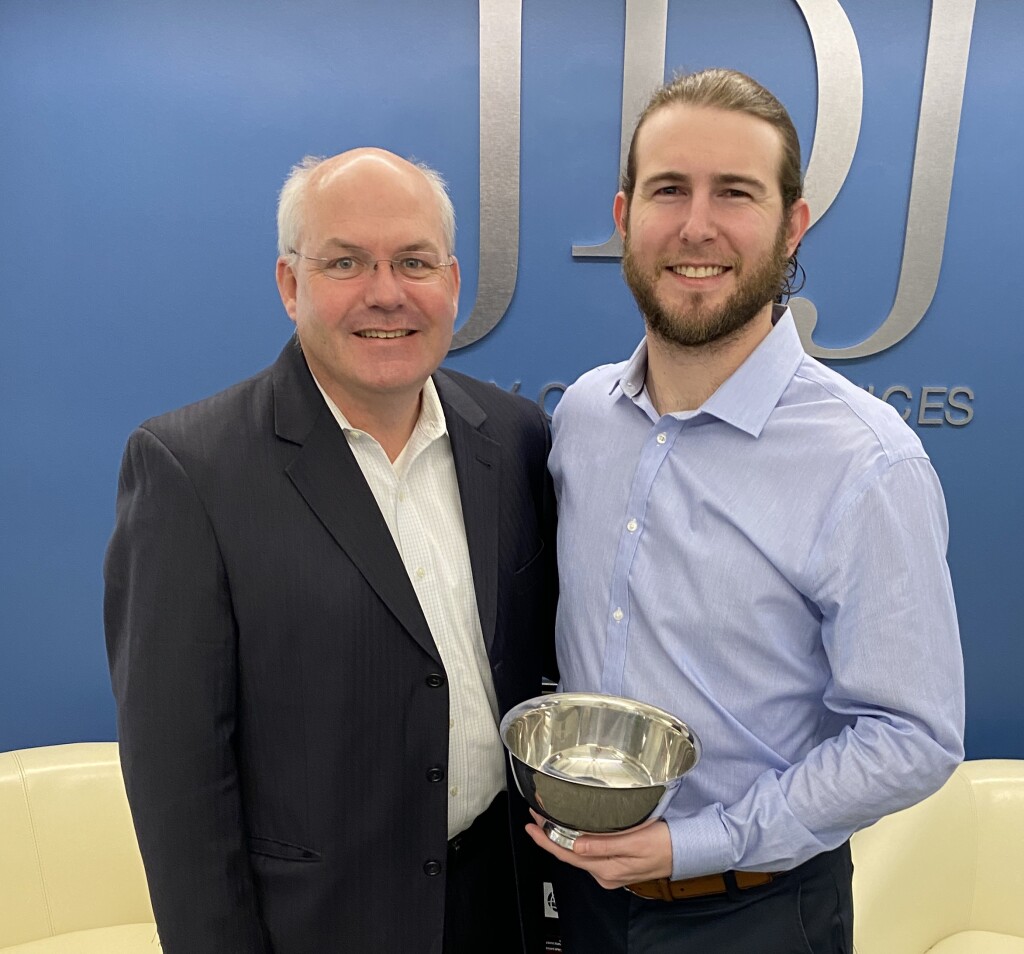 We are delighted to announce Logan Cerruti is the recipient of the most recent Capturing and Recognizing Excellence (CARE) award! The CARE award is a peer-nominated accolade to recognize colleagues who deliver outstanding service. Jamie Kittler, JDJ’s President, honored Logan at the firm’s holiday party with a speech outlining his accomplishments and presented Logan with silver bowl engraved with his name.

Logan was selected for this honor because of his ongoing commitment to providing outstanding service to clients and supporting his teammates. Logan works on several complex, fast-paced, and nuanced client relationships. He thinks critically, anticipates client questions, and juggles multiple pressing client requests, earning the confidence of clients and the respect of his teammates. Logan takes his responsibilities seriously, but he brings a lighthearted energy to everything he does, which makes him a pleasure to work with.

During team transitions in 2021, Logan stepped up to provide additional support on client relationships across JDJ teams, despite already having a full workload. During this time “the special requests from clients did not stop, and Logan kept all those plates spinning with very little direction.” The manager of one of those teams said, “It was a big relief to know that Logan would remain on top of deadlines and deliverables. The reconciliations were finished in warp speed, and it was the fastest we’ve ever gotten the report out.” One teammate summed it up this way: “I am always impressed by Logan’s organization and attention to detail on client work.” Another noted, “Logan is the epitome of a team player and a champion of efficiency.”

Logan is a strong corporate contributor, creating tools and sharing tips to train colleagues. A new team member credited Logan as being “a huge part of my success during the first year at JDJ,” sharing knowledge and acting as a resource. “He is an asset to the firm,” said one teammate. “His expertise, reliability and humor are greatly appreciated.” Logan is also an active member of JDJ’s Best Practices Group.

Congratulations, Logan, on this impressive achievement and well-deserved recognition of your contributions.

The CARE award is made twice per year and previous winners include Stephen Lau, Abi Smith, Tyler Hilliard, Gina Rego and Elizabeth Fogarty.